Running for the love of lungs

When Mike Irwin was 49 years old, he received shocking news that explained the difficulties he had breathing. His diagnosis of bronchiestasis in 2010 started a 5-year journey of lost breath, doctors’ visits and surgeries.

“I just kept getting sicker and sicker and it was a struggle to get through the day. And nothing seemed to work. I had more than one bronchoscopy,” Mike said. Two years after his diagnosis, Mike had his first procedure. 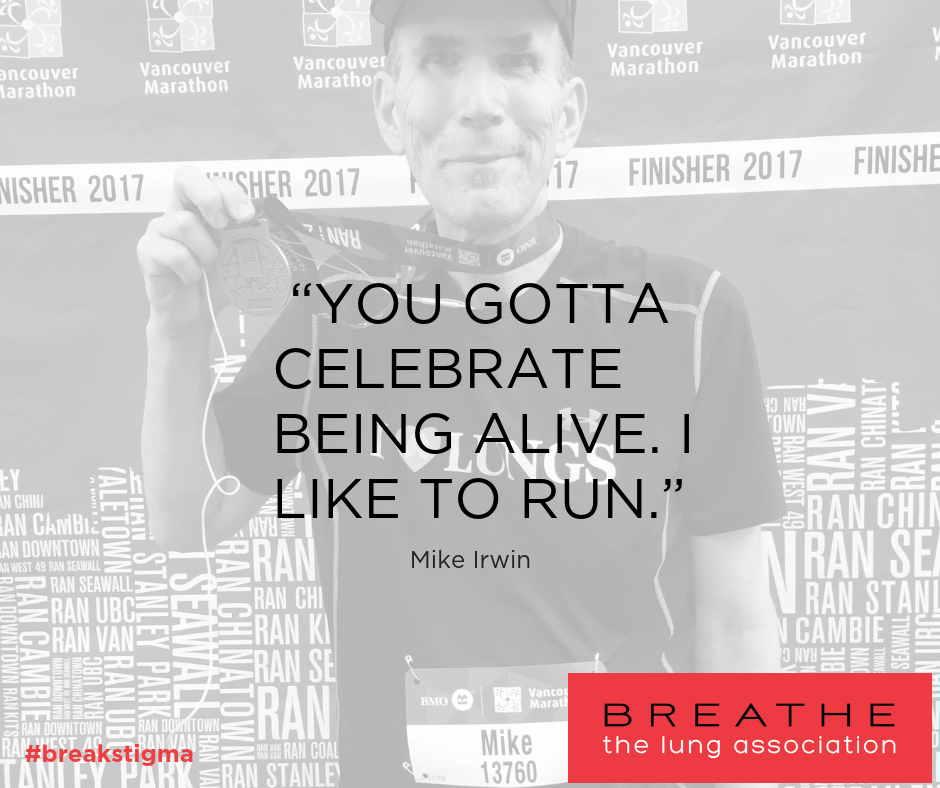 Bronchiestasis is a disease that causes airways to widen and stretch out. In some places the airways are so stretched out they form little pockets. Germs, dust and mucus collect in these pockets and get stuck.

In 2015, things got worse for Mike. On October 6, 2015, due to some complications, he had to be “medevaced” to Vancouver. The infection that was discovered meant that he had to have the middle lobe of his right lung removed. But once his stitches were out, he laced up his running shoes.

“I started walking at first to keep active and kept my lungs functioning.”

In 2016, Mike completed his first marathon in Vancouver, followed by two more half-marathons.

Since then, has run 10 half-marathons and 4 full marathons within 2 years.

While his own diagnosis might have been the wake-up call, it was his father’s death that pushed him further along the track.

“My dad died from lung cancer in 2012. And I made him a promise that I was going to do a half-marathon.”

“I decided to run to raise awareness about lung disease.”

“There’s not a day goes by that I don’t realize how lucky I am. Everything fell into place: The right diagnosis, the right surgeon and that’s why I’m able to do what I do.”

To recognize and show his gratitude for being able to breathe, he runs half-marathon every year to celebrate his birthday.

“You gotta celebrate being alive. I like to run.”